Katie Melua - I’ll be there: https://www.youtube.com/watch?v=7IRIP-hSfJ0 over 28 millions views!

Buckingham Palace: A Celebration of Young People in the Performing Arts - with the English National Ballet, the Royal Opera House and pop stars https://www.youtube.com/watch?v=NpXG84lYwMc

World Premiere of Phantom of the Opera at The Colliseum: https://www.youtube.com/watch?v=F15cCbSnRBs&t=92s

Phantom of the Opera at the Barbican: https://www.youtube.com/watch?v=wLW3cP5jl5E

Premiere of Imogen Heap’s Love the Earth with film at The Royal Albert Hall: https://www.youtube.com/watch?v=2rAv7B3kRmI

Cry Me a River recording with The Voice contestant Bob Blakely: https://www.youtube.com/watch?v=-qYjbAcKamk

'Happy' rehearsal before a gig a Galvin La Chapelle: (https://www.youtube.com/watch?v=xQiVdrbiYyo)

Docklands Sinfonia has announced that there will now be two separate orchestras under our orchestral family - responding to huge successes and achievements over the last ten years.

Our professional orchestra continues to go from strength to strength with recent performances of Roy Budd's Phantom of the Opera at the Barbican and supporting Hawkwind for the band's UK tour in 2019.

Docklands Sinfonia will be celebrating 10 year's since its formation in 2019 with a series of spectacular concerts and events - including a performance of Roy Budd's Phantom of the Opera at the Barbican in March and a celebratory community concert at its home in St Anne's Limehouse on Friday 5th July.

Docklands Sinfonia groups and ensembles will also be performing a series of 'lunchtime classical' pop-up concerts Canary Wharf throughout July in Jubilee Park.

In October, the orchestra will be bringing its exciting Caretaker's Guide to The Orchestra children's concert series to Bristol for the first time as part of its residency at Clifton High, Bristol. Docklands Sinfonia will spend a fun-packed week in Bristol holding educational workshops and concerts for over one thousand local school pupils - bringing together classical music, art and literature. The week will culminate in a performance for the community at Clifton Cathedral on Friday October 25th 2019.

In December, Docklands Sinfonia will round-up an exciting year of celebrations with a performance of Carl Orff's epic Carmina Burana with Skolia Choir at St Peter's, Notting Hill.

Other exciting concerts and events will be announced throughout the year. So watch this space!

Docklands Sinfonia will be joining the legendary rock band Hawkwind on their near sell-out UK tour in November, performing in six top venues including The London Palladium, The Sage Gateshead and Symphony Hall Birmingham.

The orchestra has also performed on Hawkwind's new album 'The Road to Utopia', featuring guitar icon Eric Clapton and produced by composer and songwriter Mike Batt.

Docklands Sinfonia is undertaking our most ambitious series of children’s concerts, which will initially be performed for 2,200 pupils from 20 primary schools in Tower Hamlets. Highlights include:

‘The concert was a completely transformative experience, which exposes the children to a whole new world and gives them a sense of entitlement and ‘cultural capital’ which is only available to them via free outreach projects. The chance for them to feel welcome and at home in a concert hall is in itself very powerful, as it determines how they see themselves, both now and in the future’ – Deputy Head

Docklands Sinfonia has won a coveted £1,000 award at the Guildhall Creative Entrepreneurs supporters and funders evening.

The orchestra's founder and conductor Spencer Down received the reward after presenting Docklands Sinfonia's future plans - including an expansion of the orchestra's education work in the East End - to a panel of high profile judges.

The supporters and funders evening at Milton Court in the Barbican is an annual event, which was this year presented by actor, musician, writer and director Simon Callow.

Spencer Down said: "It's fantastic to receive this award which will really help the orchestra - particularly with expanding our educational concerts in the East End of London."

Docklands Sinfonia performs at the Barbican

Docklands Sinfonia received a standing ovation at the Barbican for its charity concert for Save the Children on Sunday 19th June 2016 at the Barbican.

The orchestra shared the billing with The Kamkars - a well-known Iranian traditional/classical crossover group from Iran consisting of seven brothers, a sister and a daughter. They will perform in the second half while Docklands Sinfonia will be performing the UK Premieres and some World Premieres of the Kamkars orchestral music in the first half.

Inspired to play by their father, the Kamkars have toured extensively all over the world and performed at the Nobel Prize ceremony. Their intricate and beautiful arrangements of traditional folk songs have proved to be very popular with UK audiences at previous Barbican concerts.

Spencer Down, conductor and founder of Docklands Sinfonia, said: “It was wonderful to be invited to perform on stage with the Kamkars for Save the Children, which does such important work to help children in war zones.”

The concert also featured the World Premiere of Mehran Rouhani's ‘Love and Peace Quotes’ for Soprano and Orchestra. Tehran is a good friend of the orchestra and this piece has been specially composed for the concert. It is dedicated to his daughter, Honey Rouhani, who sang solo Soprano.

To see highlights of the concert click: Video - Children's Concert

Thanks to several grants and donations from generous supporters, Docklands Sinfonia was able to invite 1,600 Key Stage 2 primary school pupils in the London Borough of Tower Hamlets to two free concerts on 15th December 2015 at The Great Hall at Queen Mary University, Mile End.

As Tower Hamlets is London’s most deprived borough, the orchestra’s objectives were for local school children to hear their local orchestra in their local concert hall, to inspire them to enjoy orchestral music and to encourage them to take up playing orchestral instruments.

The 13 schools first heard orchestra’s conductor Spencer Down introducing the musical instruments and the musicians briefly demonstrating what they sound like. He also explained his role as the conductor.

While the orchestra played Mendelssohn’s “A Midsummer Night’s Dream”, based on the play by William Shakespeare, children’s author and illustrator James Mayhew painted the scenes depicted by the music.

His paintings were projected onto a large screen behind the orchestra so all the children could watch as his work changed in time to the music. Between the movements, James summarised the story for the children.

Paul Edlin, Director of Music at Queen Mary University, said: “If I may say, there were moments when I had to hold back a tear. It was inspiring, touching, important, developmental and transformative. “ 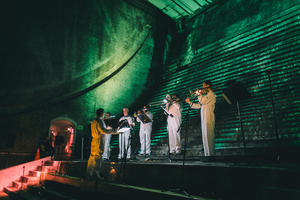 Docklands Sinfonia brass players performed a unique series of concerts inside the depths of Tower Bridge’s Bascule Chambers under the Thames last September. For the first time ever, Tower Bridge hosted an intimate public event, bringing this cavernous space - hidden below river-level - to life with live musical performances.

The concerts were so unusual that they attracted considerable media attention including ITN News, BBC World Service, The Times, The Guardian, The Evening Standard, Metro and Time Out. The group also performed live on BBC Radio 3 which has since been repeated.

The large south Bascule Chamber is where one of the 2,500-tonne counterweights descends when the bridge is raised. Using recordings of Tower Bridge’s very own lifting mechanisms, internationally renowned composer Iain Chambers created a bespoke piece for brass and electronics, transforming this global landmark into a giant musical instrument.

Docklands Sinfonia’s conductor and founder Spencer Down said: “As concert venues go, this has to be one of the most unusual. The acoustics down there are amazing and Iain’s piece captures the atmosphere perfectly. It was a truly unique musical experience.” 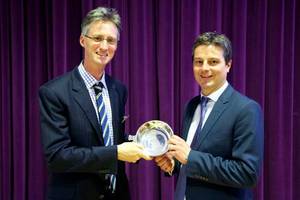 Spencer was awarded a trophy and £1,000 grant by the Amati Global Investors at the company's AGM, held at Milton Court in the Barbican last week.

The award will be used to support Docklands Sinfonia's education work with children's author and illustrator James Mayhew in Tower Hamlets. It will help fund an educational concert which brings to life stories of myths, legends and folktales that inspired some of the greatest music in the world.

The project will benefit over 1,600 primary school children - the vast majority of whom will have had little, if any, experience of live classical music. It will also help support the professional development of Docklands Sinfonia's young musicians.

Spencer said: "We are incredibly grateful to the Amati Global Investors and the Guildhall School of Music for having faith in our project. It will make a big difference as we will now be able to reach 1,000 more children." 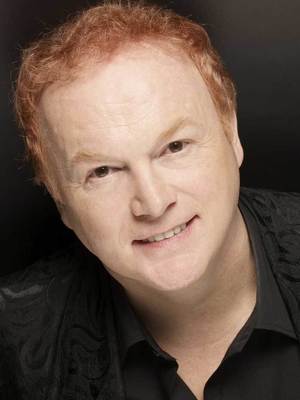 Mike Batt LVO, the renowned British songwriter, composer and conductor, is to become a patron and principal guest conductor of Docklands Sinfonia.

He has conducted many of the world's great orchestras, including the London Symphony, Royal Philharmonic, London Philharmonic, Sydney Symphony and Stuttgart Philharmonic in both classical, pop recordings and performances.

Docklands Sinfonia founder and conductor Spencer Down: "Mike Batt is a music legend who we have have had the great privilege of working with. It means a lot to us that someone of his calibre is now one of our patrons."

Mike Batt added: I have really enjoyed working with Docklands Sinfonia on many occasions. I am now looking forward to supporting this young and dynamic orchestra on its exciting journey. This is how great orchestras start - from the ground up, bringing new young players into the profession and achieving excellence."

Docklands Sinfonia’s new fundraising drive has had a great start to the year with over £27,000 pledged by generous donors since the beginning of 2015 to help support our educational work and ground-breaking projects.

We would like to say a big thank you to all our great supporters. If you would like to make a donation, please email us at [email protected] or donate via Docklands Sinfonia's Virgin Giving page.

Members of the Docklands Sinfonia brass section performed for London Mayor Boris Johnson and the US Ambassador at the unveiling of a new 9/11 sculpture in the Olympic Park.

The amazing artwork, which was commissioned by the educational charity Since 9/11, is made from steel from the former World Trade Centre building and is now on permanent display in Stratford.

To commemorate the occasion, Docklands Sinfonia challenged young composers at Junior Guildhall to write a new work for the ceremony. Our brass players performed three pieces by the youngsters - including 14-year-old William Harmer, who conducted his piece as the sculpture was unveiled.